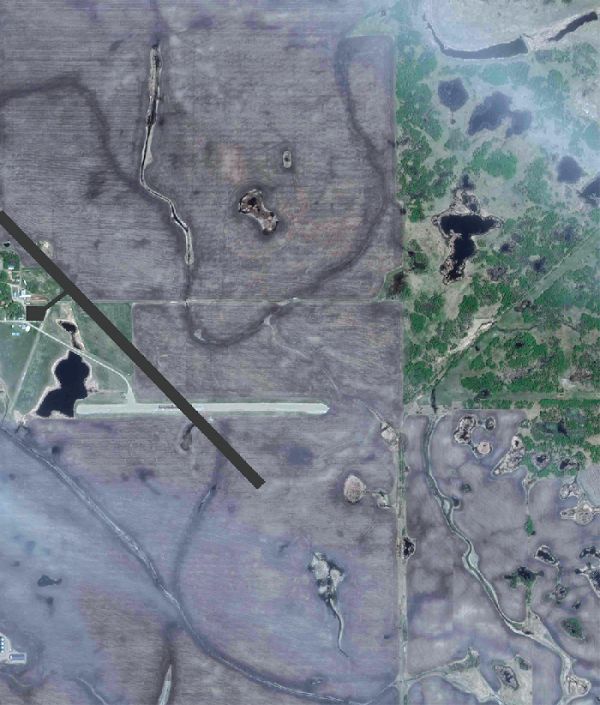 The group working on expanding Moosomin’s Airport is getting closer to finalizing funding commitments from municipalities for expansion of the local airport to allow Saskatchewan Air Ambulance to better serve the area.

“We have spoken to 80 per cent of the municipalities we want to talk to,” Jeff St. Onge said in an interview.

“We have our last meetings coming up. A lot of the ones we’ve talked to have made a commitment, and the others are waiting until we meet with all the municipalities together to make their commitment.”

The plan is to raise a portion of the cost from local municipalities, leverage that with the provincial CAPP grant which would match local contributions, then approach corporate contributors to cover the balance of the cost.

About half a million dollars has been committed by municipalities so far. The process would involve lengthening, paving, and possibly realigning the runway at Moosomin airport.
An engineering study will be done to determine the feasibility of maintaining the the current runway alignment or switching to a northwest-southeast alignment, which would be more in line with prevailing winds in the area to avoid crosswinds when landing.

While the fundraising is ongoing, the group has approached people who would be affected by the improvement to see if there are any objections or issues with the expansion.
The public consultation process is necessary to obtain approval from Nav Canada for any alterations to the airport.

“Part of that has already happened,” St. Onge said.

“You have had information in the paper, people have phoned me based on that. Now we are doing the official consultation with letters to affected parties.”

“Moosomin, surrounding communities, and businesses are beginning a substantial undertaking to improve the local airport,” the group wrote to affected parties.

“In Saskatchewan, two recent changes to the delivery of critical health care services have greatly increased the importance of developing a primary airport system in this area of the province.

“In January of 2017 the Saskatchewan Stroke Protocol was changed to provide higher level care for all Saskatchewan patients. A world class Stroke Unit is operated at the Royal University Hospital in Saskatoon and timely access to these professionals is critical to increased patient recovery.

“Secondly, in the spring of 2019, the Jim Pattison Children’s Hospital will be opening in Saskatoon.

“This state of the art hospital will offer the province’s only pediatric emergency ward. Timely access to this specialized health service will benefit critical pediatric patients from this large service area. In addition to these two exciting health care benefits, a fully developed airport would also allow medical personnel to be transported to this area of the province in the event of a tragedy.

“The Moosomin airport currently does not have a runway configuration to allow Saskatchewan Air Ambulance to service our area.

“In addition to equal opportunity to centralized health services, this project will provide Moosomin and surrounding communities with approximately $2,400,000 in annual economic benefits. The calculated monetary value is derived from a 2002 Department of Highways study and has been adjusted to 2018 dollars. The financial gain results from business traffic and opportunities. Business and non-business traffic would include Saskatchewan Air Ambulance, STARS, charter aircraft, police aircraft, Saskatchewan Search and Rescue, business planes, business jets, agribusiness aircraft, seismic business et cetera.

“The proposed project would see the building and paving of a new runway at the Moosomin Municipal Airport located one mile northeast of Moosomin. The runway is proposed to be 4,000-plus feet, and will include a new taxiway and apron. New Jet A fueling equipment would provide STARS helicopters with a safe, efficient, and reliable method to refuel their fleet. The project will be complete with the addition of runway and threshold lighting, Transportation Canada Area Navigation (RNAV), and an Automated Weather Observation Services (AWOS).”

The group will be looking for feedback from the public until February 2 of next year.

The group is hoping to begin work on the project in 2019 and complete construction in 2020.