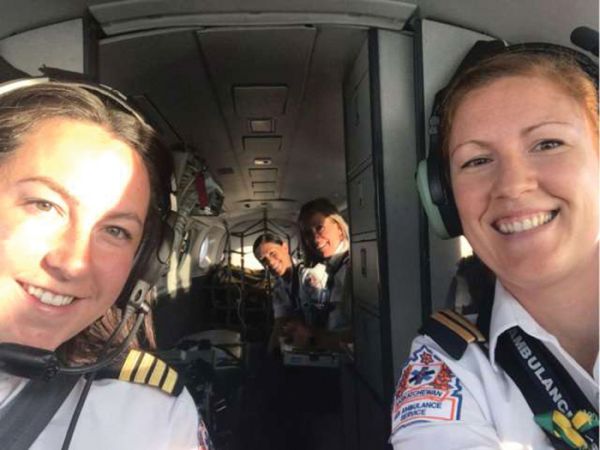 It was the first time in the organization’s 73-year history that all four crew members on the plane were women.

Pilots on the flight were Carly St. Onge and Tammie Kulyk, paramedic was Jen Rondeau and flight nurse was Crystal Lybeck on the call, which was for a man experiencing respiratory distress in the community of Buffalo Narrows.

“I knew I was going to fly with Tammie, because I can see that schedule, but I didn’t know until the call came in that we would be flying with Crystal and Jen.

“It was just by chance that we were all together,” says St. Onge. 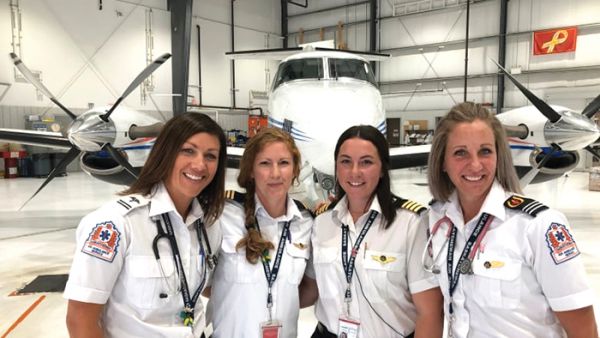 Carly St. Onge, who grew up in Moosomin, was part of history August 2 when she was part of the first Saskatchewan Air Ambulance flight with an all-female crew.

There are not a lot of women in aviation.

“There are more women getting into it, but currently only six per cent of commercial pilots are women,” says St. Onge. “It’s still extremely male-dominated. When I went through the SIAST program in 2013 I was one woman in a class of 23. This year there are five women out of 20 or 25.”

Why did she get into aviation?

“Dad got his pilot’s licence when he turned 50, and I was maybe 15 then. I watched Dad get his licence, and he took me flying, and then I decided to get my private licence so I could fly recreationally, and then I fell so in love with aviation I don’t know if I could have done anything else.

“SIAST has a commercial pilot program and you end up with a two-year diploma. The program is very helpful, and there is a ton of flying that you do on the back end of that. I did my flying in Regina with Dad’s airplane. You get a series of licences and night ratings until you are hireable.”

So how did she get into the Air Ambulance?

“Once I got all my licences, I just wanted a job and the job I happened to get was with a company called Keewatin Air, based in Iqualuit, Nunavut.

“The airplane I got put on was a medevac airplane. That’s how it happened.

“I did air ambulance there for four years and then I’ve been with the government of Saskatchewan for almost three years.

“The only thing I’ve actually done is air ambulance.”

She described the life of an air ambulance pilot as being a lot of waiting for calls to come in, interspersed with periods of intense activity as calls come in and must be responded to immediately.

“We do 12-hour shifts, it’s just like a nurse, day or night shifts,” she said. “Some days it’s so busy that we’re not even at the hangar all day. We just wait, and once the call comes in we have 30 minutes to be in the air.

“I found it more stressful when I first started. I found it stressful to be on call. Now I’ve been doing it so long I’m used to being on call. That doesn’t make me nervous any more.

“But there’s an intensity to it for sure, especially if you’re going to a serious call.

“Another stressful factor—airlines or charter companies can cancel for weather. We don’t cancel for weather. If it meets our absolute minimum to go, then we go, because someone needs our help, and there’s no way we’re going to cancel our flights generally.

“We do get to fly in some very interesting weather. Everyone has a minimum weather they’re allowed to fly in, and it cuts us off when the visibility gets too low or the clouds get too low—there’s nothing we can do about that.”

“Lots of stuff we do is transferring patients from places in Saskatchewan to Saskatoon or to Regina, but we have an airplane go to Edmonton four times a week for sure,” she says. “If you were having cardiac surgery we would take you to Edmonton and likely we would bring you back. The 7 o’clock shift airplane is in Edmonton right now, they’re doing a repatriation, so somebody who has been there for a surgery or something, and now they’re coming back. We do a lot of that.”

St. Onge said many people are not fully aware of the role of the Saskatchewan Air Ambulance.

“I find when I tell people who I work for, 90 per cent of people have no idea. That’s just because we’re a government entity so we don’t do advertising and things like that—we’re just a service. You don’t know about it unless you know someone who’s flown with us, or you’ve flown with us.”

St. Onge said she’s surprised by how much attention the first all-female flight has received, and the amount of positive feedback from the public.

“We knew it was a first. It was just exciting for us. We had no idea it was going to be this historic, or this many people were going to care about this. I don’t have Facebook, but we keep hearing that one of the Facebook posts has been shared over 5,000 times.

“I thought it was cool just because it was a career first for us, but then everyone else was excited as well.” 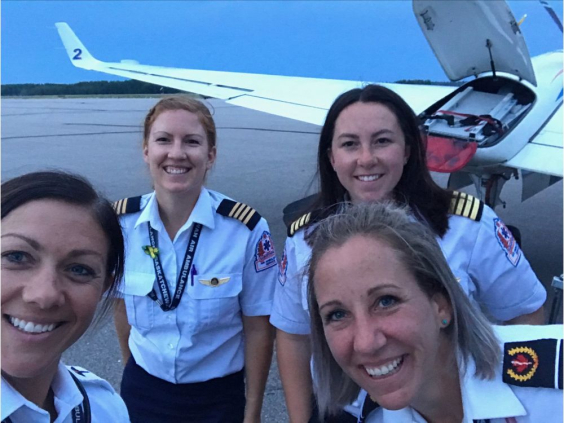